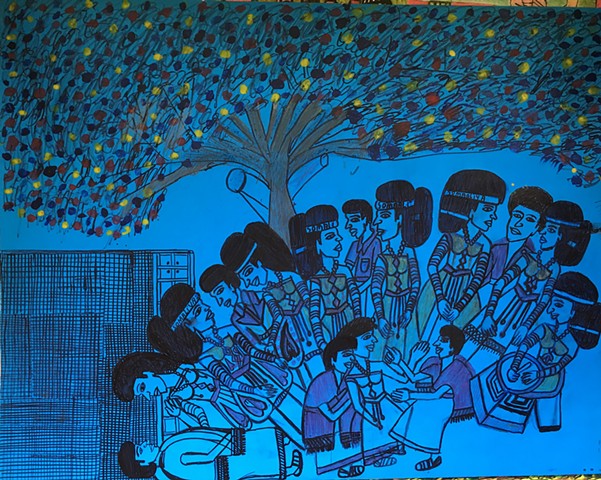 Drawing by Hassan Nor
< previous next >

I had the good fortune to meet Hassan Nor, through his daughter, and saw his raw kind of art I would describe as art brut. Adeer (Uncle) Nor's drawings depict his memories of life in Kismayo, Somalia, before the civil war when he was young.

Nor is a wonderful storyteller with his drawings. In this drawing, he states that the young people gather outside of the city to dance. There is more to the story but you have to hear it in his own voice. His drawings show life as he remembers from earlier days in Jubbaland.

Over several years of meeting, sometimes with interpreters, I learned from the elder artist, born in 1936, about his drawings, and we had conversations at times where we communicated mostly through our art. As it became clear that Nor wanted to find a market for his art, we ventured forward to exhibit his drawings in several venues. The first was Capitol Cafe on Franklin Ave in Minneapolis, to a crowd of about 80 Somali-Americans. His next exhibit was a collaboration with some of my drawings in a window downtown, in a venue sponsored by Made Here (Hennepin Theatre Trust).

In 2016, When I had the opportunity to meet Mia's curator of African art, Jan-Lodewijk Grootaers, I advocated for a museum exhibition of Nor's work. Assisted by artists and friends, who acted as interpreters, Halwa Hussein, and Awes Osman, we brought Adeer Nor's work to a larger audience in the first show of Somali art in a Minneapolis museum. The exhibit, "I am Somali" (2017-18) featured seven of Nor's narrative drawings.

"I am Somali" -- Three Artists from the Twin Cities ~ Minneapolis Institute of Arts, Minneapolis, MN 2017-18